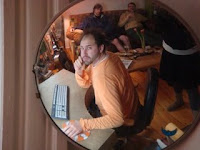 Robert Lee Brewer posted an interview with Justin Marks, author of A Million in Prizes, to his blog, Poetic Asides, on the Writer's Digest website.

A small sampling of the interview:

Robert: If you could pass on only one piece of advice to fellow poets, what would it be?

Justin: I've been given such large heaps of bad advice over the years, I'm hesitant to offer any of my own. So maybe my advice should be, “don’t take any advice.” Then again, I've also gotten some good advice that has often helped sustain me: Trust yourself. Don't let anyone or thing stop you. Be willing to change. Persevere. Stuff like that. That’s my advice.

Want more? And why wouldn't you? Follow this link for the full interview: Exclusive Interview with Justin Marks.
Posted by New Issues Poetry & Prose at 8:08 AM No comments:


View Larger Map
Posted by New Issues Poetry & Prose at 8:28 AM No comments:

Two New Poetry Titles for May

Zero at the Bone by Stacie Cassarino:

"Of the many ways of knowing the world, Stacie Cassarino in her elegant and poignant first book of poems, Zero at the Bone, reminds us of the primacy of the senses." —Michael Collier

Stacie Cassarino lives in Brooklyn, New York and Los Angeles, California. She is a recipient of the “Discovery”/The Nation prize and the Astraea Foundation Writer’s Fund, a finalist for the Rona Jaffe Writers’ Award, and nominee twice for the Pushcart Prize. She has worked as a chef, and has held teaching positions at Middlebury College in Vermont & Pratt Institute in NYC. She is currently a candidate for the Ph.D. at UCLA.
(more info)

"Donald Platt’s aptly titled and arresting fourth collection of poems, Dirt Angels, examines how we exist in states of physical disrepair, decay, and disability: the world’s transience exhibited in the slow degradation of our very consciousness and flesh." —Paisley Rekdal

Donald Platt is a professor of English at Purdue University. His first two collections, Fresh Peaches, Fireworks,& Guns and Cloud Atlas, were published by Purdue University Press as winners of the Verna Emery Poetry Prize. His third book, My Father Says Grace, was published by the University of Arkansas Press. He lives with his wife, the poet Dana Roeser, and their two daughters in West Lafayette, Indiana.
(more info)
Posted by New Issues Poetry & Prose at 10:17 AM No comments:

Visit the Broadsided Press website to download the new broadside of Stacie Cassarino's poem "Snowshoe to Otter Creek," beautifully illustrated by artist Caleb Brown. Stacie's new book Zero at the Bone was released this spring from New Issues.
Posted by New Issues Poetry & Prose at 10:12 AM No comments: