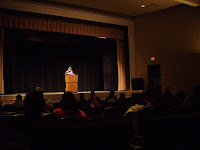 December 11 :: WMU Faculty/Alumni reading in poetry with Daneen Wardrop, author of The Odds of Being, and Lisa Fishman, author of The Deep Heart's Core Is a Suitcase (New Issues, 1998).

All readings begin at 8 p.m. and are held at WMU's Little Theater, Oliver St. at Oakland Dr.
Readings are free and open to the public.
Posted by New Issues Poetry & Prose at 1:12 PM No comments:

New Issues is now taking submissions for the 2009 Green Rose Prize, an award given to a manuscript by a poet who has already published at least one previous collection of poetry (first books should be sent to the New Issues Poetry Prize). The contest is judged by the editors of the press, who often choose additional manuscripts to publish.

Visit our website for complete guidelines.
Posted by New Issues Poetry & Prose at 9:29 AM No comments:

Winner of the 2008 AWP Award Series in the Novel

Goldie Goldbloom of Chicago, Illinois, has won the 2008 AWP Award for the Novel for her manuscript titled Invaded. Joanna Scott, author of Everybody Loves Somebody and The Manikin, judged the contest for AWP. AWP is a national, nonprofit organization dedicated to serving American letters, writers, and programs of writing. Visit the 2008 AWP Award Series page for more information on the contest and to view the winners of the other categories.

Judge's Statement: "Invaded is a strange, mesmerizing tale about characters uncomfortably defined by superficial eccentricities. It is also a wrenching love story."

Goldie Goldbloom's stories have appeared in StoryQuarterly and Narrative Magazine. She lives in Chicago and has eight children.
Posted by New Issues Poetry & Prose at 12:45 PM No comments: