Paul Guest on The Story 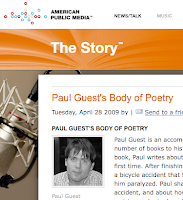 Listen to "Paul Guest's Body of Poetry" on thestory.org. Paul is the author of The Resurrection of the Body and the Ruin of the World, chosen by Campbell McGrath for the 2002 New Issues Poetry Prize. His latest book is titled My Index of Slightly Horrifying Knowledge.
Posted by New Issues Poetry & Prose at 11:27 AM No comments:

Review: The World Cut Out with Crooked Scissors

The World Cut Out with Crooked Scissors: Selected Prose Poems by Carsten René Nielsen was reviewed by Nicky Beer in the Spring 2009 issue of The Georgia Review.

A sample: "Nielsen's World, comprising selections from his three latest books, represents work from that theoretical space that often marks the transition from 'young' to 'midcareer' poet—work that seems to straddle the distance between the stylistic extremes of his peers and predecessors with élan, allowing glimpses into an often fragmented but hypnotic poetic interior."

Check out the Spring 2009 issue for the complete review, and the New Issues website for more info about The World Cut Out with Crooked Scissors by Carsten René Nielsen. Translated from the Danish by David Keplinger & the Author.

In a chest of drawers with seven hundred drawers, each a different shape and size, lies a lapwing's egg somewhere. The thief is a freckled twelve-year-old girl who has to find the egg before the sun goes down. She knows that if she finds the egg and breaks it into her face, the freckles will disappear. But in the drawers she opens there is only water, only cheeping lapwing chicks. She climbs higher and higher, drawer over drawer, and finally just one drawer's left, at the very top, and the sun has now almost vanished. But it sticks, and she pulls and toils and tugs with her spindly arms, thrusts her feet against it, heaves and yanks and begins to cry. Then at last the drawer gives. It's been inserted upside down, and an egg falls out and onto the floor. With despair she stares at the egg as the lapwings start shrieking. They are all hand puppets made of old socks, and we, who hide behind the furniture in the living room, have to hold up a hand to our mouths not to laugh.
Posted by New Issues Poetry & Prose at 9:04 AM No comments:

There are only a few days left to submit panel proposals for the 2010 AWP Conference & Bookfair in Denver. The conference will be held from April 7-10, 2010 at the Hyatt Regency Denver & Colorado Convention Center. The deadline for proposals is May 1, 2009. To submit a proposal, please visit: www.awpwriter.org/conference/2010proposal.php
Posted by New Issues Poetry & Prose at 8:40 AM No comments:

Congratulations to Diane Seuss for winning the University of Massachusetts Press Juniper Prize for Poetry, judged by Pulitzer-prize-winning poet James Tate. Diane's first book, It Blows You Hollow, came out with New Issues Press in 1998. She is writer-in-residence at Kalamazoo College. 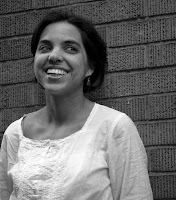 Judy Halebsky has won the 2009 New Issues Poetry Prize for her manuscript Sky=Empty. Marvin Bell, author of Mars Being Red, judged. Judy wins a $2,000 award and publication of her manuscript in the spring of 2010.

“I was caught by the clarity of mind and expression of Sky=Empty — a quality distinctive at any time. I was caught by the ear and eye, the tone of voice, and the easy movement between inner and outer. The respect for language is tangible. This is a beautiful, engaging first book, the sort of book one may buy a second copy of to give away.” —Marvin Bell, from the Judge’s Citation

Judy Halebsky is a member of the Sacramento Poetry Center’s Tuesday night workshop and has an M.F.A. from Mills College. Her poems have appeared in Runes, Five Fingers Review and Eleven Eleven. Residencies at the MacDowell Colony and the Millay Colony have supported her work. Originally from Halifax, Nova Scotia, she is currently in Japan studying noh theatre on a research scholarship from the Japanese Ministry of Education (MEXT).

Keith Ekiss’s manuscript Pima Road Notebook was named runner-up by the judge and will be published in the fall of 2010.

Ekiss is a former Wallace Stegner Fellow and the Jones Lecturer in Poetry at Stanford University for 2007-09. He is the past recipient of scholarships and residencies from the Bread Loaf and Squaw Valley Writers’ Conferences, Santa Fe Art Institute, Millay Colony for the Arts, and the Petrified Forest National Park. He is the Artistic Director of the Center for the Art of Translation in San Francisco.
Posted by New Issues Poetry & Prose at 12:39 PM 6 comments:

Barnard College announced today that writer Joy Harjo has chosen Sandra Beasley's I Was the Jukebox as the winner of the 2009 Barnard Women Poets Prize for the best second collection of poems by an American woman poet. Beasley's first book, Theories of Falling, won the 2007 New Issues Poetry Prize.
www.barnard.edu/newnews/news041209
Posted by New Issues Poetry & Prose at 12:35 PM No comments:

Deanne Lundin will read from her work Wednesday, April 15 at 7:00 p.m. at Crazy Wisdom Bookstore 118 S. Main St. Ann Arbor, Michigan. Lundin is the director of the Works-In-Progress Reading Series at the bookstore for the past four years. The series has brought poets and fiction writers from across the state and country to read for enthusiastic audiences and extended question and answer sessions.

A tireless supporter of other authors, Lundin’s work has been widely published (both fiction and poetry) in literary journals including The Kenyon Review, The Antioch Review, Prairie Schooner, The Colorado Review and online magazines as well. She has won numerous fiction and poetry awards including the Hopwood Award, and is author of The Ginseng Hunter’s Notebook published by New Issues Press. She has studied at Harvard and the University of Michigan and received her MFA from there in poetry. She has been a fellow at Breadloaf and most recently was writer-in-resident at Ragdale Foundation in Lake Forest, Illinois.

David Baker has said of her work: “Deanne Lundin’s The Ginseng Hunter’s Notebook is an authentic poetic harmonium, blending a probative and anxious post-modernism with a nearly primitive lyrical sensibility. I am struck and pleased by her lucid sense of the present, clarifying the moment as we live it, but equally awe by the transfomration of her fractious narratives, wrung from her wide and wild historicl flair. Hildegard of Bingen meets the Internet, indeed! Here are potions, conjurations, folkloric remedies, like voices from a vexing past –are they our future? are they our demons? – as acrid, as overwhelming as they are brilliant and healing. The Ginseng Hunter's Notebook is a marvelous debut.”

Free and open to the public.
Posted by New Issues Poetry & Prose at 9:52 AM No comments:

A Million in Prizes by Justin Marks

A Million in Prizes was selected by Carl Phillips as winner of the 2008 New Issues Poetry Prize, an award for a first book of poetry. Phillips, in his judge's citation, writes, "A Million in Prizes seduces in the best possible way: subtly, with a poignant wit, and a sly charm." Marks is the founder and editor of Kitchen Press Chapbooks in New York City and author of the chapbook Voir Dire (Rope-a-Dope Press). More Info

Hilarity is Seyburn's third book of poetry and winner of the 2008 Green Rose Prize, awarded for a full-length collection of poetry by an established poet. Seyburn is an assistant professor at California State University, Long Beach, and co-editor of POOL: A Journal of Poetry based in Los Angeles. Poet David Citino notes that Seyburn's poems are "filled with a strange, ambitious and compelling music made of the mythic, momentous and mundane days of our lives." More Info
Posted by New Issues Poetry & Prose at 10:48 AM No comments:

Check out the internet journal Gently Read Literature for a new review: "Risks and Expanse: Caroline Klocksiem on Sandra Beasley’s Theories of Falling"

"Beasley does not grasp her poems too tightly. They are not owned, but shared moments of language. What is true is the experience of the language, the breathtaking effect of a sharp-focused lens."
Posted by New Issues Poetry & Prose at 7:58 AM No comments:

New Issues is a proud sponsor of National Poetry Month. Check out their website.
New Issues's NPM web page.
New Issues poetry on the NPM website:
"Goldfish Are Ordinary" by Stacie Cassarino
"The Split Ends of My Beard Have Split Ends" by Justin Marks
"My Brother's Mirror" by Donald Platt
"What I Disliked about the Pleistocene Era" by Patty Seyburn
Posted by New Issues Poetry & Prose at 10:38 AM No comments: