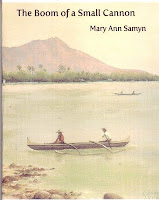 New Issues Poets David Dodd Lee and Mary Ann Samyn will present readings from their work on Saturday, March 13,2010 at 7 p.m. Broadsides featuring the poet's work will be created by KBAC artists. The broadsides and other works by the poets will be available during the event for sale and signing. Broadsides from other "Poets in Print" events and other book arts creations are also available for sale.This event is free and refreshments are served. Doors open at 6:30.

Mary Ann Samyn is the author of several collections of poetry, including Beauty Breaks In (New Issues, 2009) and The Boom of a Small Cannon (Dancing Girl Press, 2010). She teaches in the MFA program at West Virginia University where she is also the Bolton Professor for Teaching and Mentoring.

The Poets in Print Reading Series

ML Liebler, author of The Moon a Box (New Issues, 2004) is the recipient of the 2010 Writers for Writers Award from Poets & Writers Magazine. Other writers honored include Junot Diaz and Maxine Hong Kingston.

Poets & Writers Announces Recipients of 2010 Writers for Writers Award and Editor's Award
Posted by New Issues Poetry & Prose at 9:04 AM No comments:

Goldbloom's novel was chosen by novelist Joanna Scott to win the 2008 AWP Award Series in the Novel, an award given by the Association of Writers and Writing Programs.

In her judge's citation, Joanna Scott called Toads’ Museum of Freaks and Wonders "a strange, mesmerizing tale about characters uncomfortably defined by superficial eccentricities. It is also a wrenching love story."

Visit the New Issues website for more information about Goldbloom's novel. The book will be available February 26.
Posted by New Issues Poetry & Prose at 5:13 PM No comments:

Herb Scott, the founding editor of New Issues Press, was known for being an inspiring creative writing professor and a tough editor. In the newly released collection of his work, edited with an introduction by David Dodd Lee, we can once again be reminded that Herb was above all a poet, and one of huge talent.

His friends and family, former colleagues and students, have a tradition of raising a glass to his memory every February 8th, his birthday. This year I intend to not only raise my glass to him, but also read aloud and share his poetry. I encourage others to do the same.

"The Other Life is testament to a quiet force in American poetry, to a generous soul who bore witness to the world with goodwill and good humor. While Herbert Scott was a modest man, this collection is not a modest accomplishment. Reading these wonderful, rich poems spanning his entire career gathered together in one book feels like a warm home we enter from the cold. We can take our boots off, sit down and calmly ease into the sustaining light of these poems."
Posted by New Issues Poetry & Prose at 11:41 AM No comments:

We Agreed to Meet Just Here by Scott Blackwood, winner of the 2007 AWP Award for the Novel, was named Finalist for the 2010 Grub Street National Book Prize in Fiction. The winner, Vestal McIntyre won the prize for his novel, Lake Overturn, published in 2009 by Harper.
Posted by New Issues Poetry & Prose at 11:22 AM No comments:

Theories of Falling by Sandra Beasley has been reviewed by Andrew Kozma for Zoland Poetry. A taste: "[The first section] embodies a world of deception, where things don’t shift form, they shift interpretation. The poems here show a mastery of metaphorical narrative, all the poems fitting together tightly towards a single goal even though the poems themselves tackle widely varying subjects." Read the whole review here.

Theories of Falling, winner of the 2007 New Issues Poetry Prize, was released in the spring of 2008. It just sold out of its first edition and will be reprinted.
Posted by New Issues Poetry & Prose at 11:17 AM No comments: